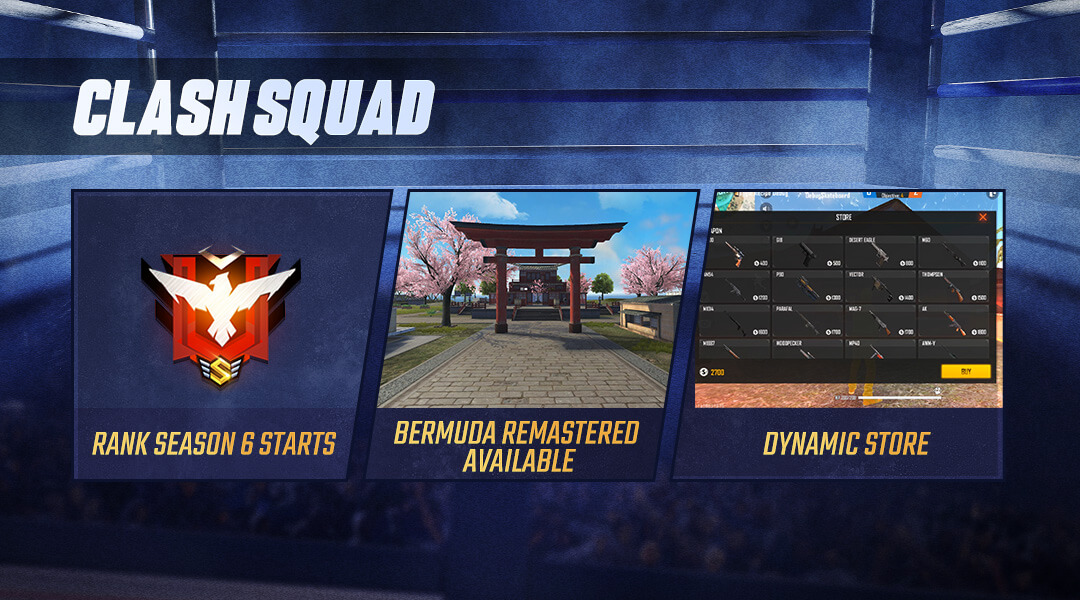 Store Adjustment for Clash Squad
"In the previous season, we adjusted the Clash Squad Store so you guys can explore different weapons on different maps. This patch, we are trying to explore more variations of the Clash Squad store. In Season 6, there will be multiple sets of stores for Clash Squad. In every match, one store will be chosen for both teams for the entire match. After this change, we hope to see more strategic decisions made based on the store provided in each match. Let us know what you think!"

Available in Clash Squad
"Enjoy Clashing in the Samurai Garden. You guys asked and we delivered."

Available in Clash Squad
"In this season, MVPs on both teams will be displayed at the end of each match. How many can you get? Let us know!"

MVP of each team will now be displayed in Clash Squad.

Available in Clash Squad
"We understand that it is a hassle to drop or pick up weapons in Clash Squad. In this patch, all the weapons and their attachments will be permanently attached in Clash Squad so you no longer need to worry about picking up a weapon with no attachments."

Weapons and attachments are now permanently attached together in Clash Squad.

Final Playzone Adjustment for Clash Squad
"We"ve noticed that some players tend to move themselves to the center of each playzone and avoid any battles until the zone closes in Clash Squad. We are attempting to fix this issue by making each circle slightly different each round." 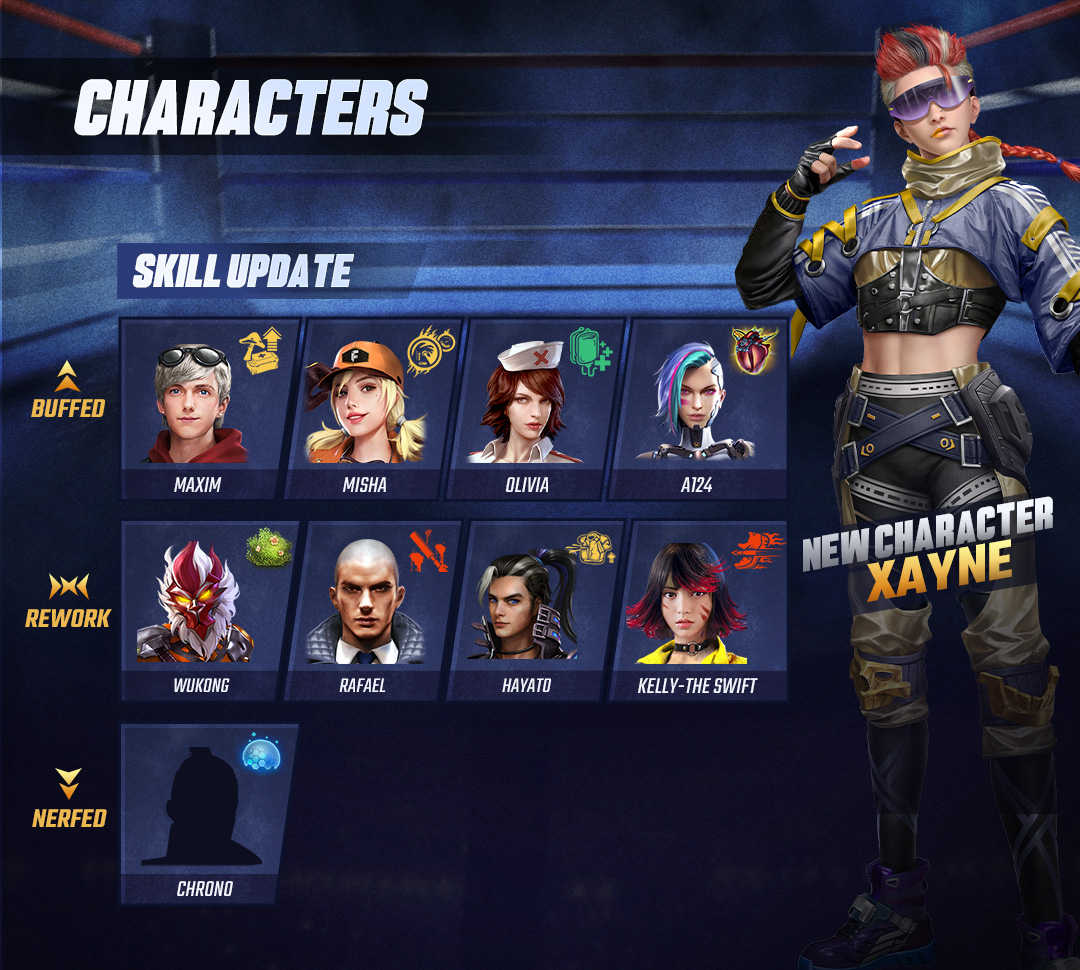 Brand new UI for the Character system.
Character max level reduced from 8->6
Awakening Character’s Skills will now have the effect of the original Character skill.
Upgrading Character levels will no longer cost any gold and diamonds.

New Caracter Available
"Introducing our new Character, Maro. The falconer will be a great Character to stay in distance and take down their enemies. Partner up with Moco to take down your enemies from range."

New Caracter Available
"Introducing Xayne, a Xtreme Sports lover who thrives under intense conditions. Use her skill wisely to turn an unfavorable battle around in clutch situations."

Character Skill Adjustment
"We realized that Chrono"s performance has been too good compared to other active skills, especially when more and more Chronos are reaching the max level. We are going to tone this skill"s down a bit without changing the main function of this ability."

Character Skill Rework
"Wukong was the first Character with an active skill in Free Fire. His skill is undoubtedly a bit outdated for the current playstyle. We are giving him a rework this patch so Wukong can take down his opponents during the ambush can quickly return to stealth after."

Character Skill Rework
"Rafael"s current skill is not optimal because it is hard to activate a skill just to stay silent in combts. Therefore, we are changing this skill into a passive so you guys no longer need to think about activating it before you want to take someone out silently."

Character Skill Rework
"As we"re combining Awakening skills with the original skills in this patch, it no longer makes sense to make Firebrand"s skill an active skill. We are changing this skill into a passive so it has better synergy with its original skill."

Character Stat Adjustment
"A124"s skill was meant to give her a super fast way to recover her HP but the speed of HP recovery is currently too slow to help you in battles. We are going to increase the speed of EP to HP conversion for A124 this patch to give her a little bit more sustainability in combat."

Character Skill Rework
"As a professional racer, Misha"s current skill does not allow her to navigate inside her vehicle safely. We are going to give her skill a bit more strength so she can drive safely."

Character Skill Adjustment
"Olivia"s skill does not bring her teammates back into combat status after using. We are giving this skill a bit more strength so saving your teammate in clutch situations can actually help you turn the fight around."

Character Skill Adjustment
"Maxim"s skill is currently not fast enough to make a significant difference in combat. We are giving it a small buff to make it more viable in the current style of gameplay."

Optimizations and Visibility Enhancement.
"Ever since we introduced the vending machine, it quickly became a core part of the Battle Royale gameplay. This patch, we are making some adjustments so it is easier for you guys to find and use the vending machine."

Now Available on All Maps
"We launched the Revival Point feature in Casual Mode previous patch and received pretty good feedback. We are glad that you guys are excited because your fallen teammates now have the opportunities to return to the battlefield. We will be making the revival point available on all the maps, let us know what you think!"

Available in The Training Grounds
"Are you ready for some 1v1 battles?"

"We are also making some adjustments based on your feedback. Keep the feedback coming!" 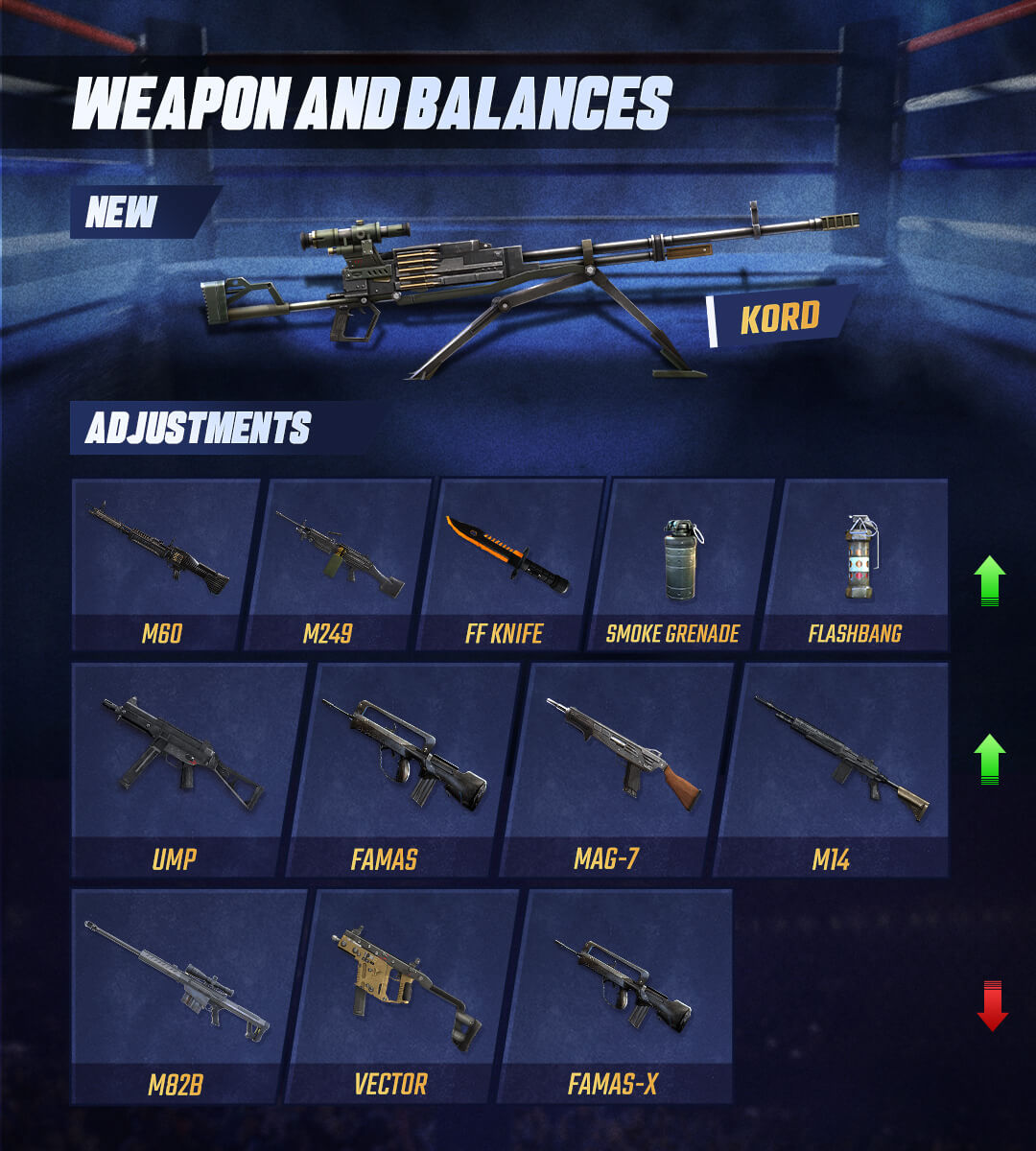 New Weapon Available in Battle Royale & Clash Squad
"Introducing the new weapon - Kord. The Kord is a LMG that can be used as an effective tool for surprising fire. Crouch down and fire to destroy all the players.""

Weapon Stats Adjustment
"Although the FAMAS has decent firepower, the three-round-burst mechanism makes it incredibly inconsistent against moving targets. We are making some adjustments to the FAMAS to make it more reliable in hitting moving targets."

Weapon Stats Adjustment
"Even though we already gave the UMP a buff last patch it was still underperforming against other SMGs due to its high recoil. We are making some adjustments to its damage this patch to make sure your opponents will feel each shot you hit on them."

Weapon Stats Adjustment
"The FF Knife was designed to be used to finish off downed opponents quickly. However, the current damage is too low to perform the execution. We are increasing the damage of the FF Knife on downed enemies so it allows you to take down wounded opponents swiftly."

Weapon Stats Adjustment
"Despite the high rate of fire, the MAG-7 is currently struggling against other shotguns. We are giving the MAG-7 a bit more power this patch to make it more competitive in the SG family."

Weapon Stats Adjustment
"The Vector Akimbo is no doubt the strongest weapon in Clash Squad right now. We are going to increase its recoil and reduce the effective range a bit to make other weapons more viable in the mid-to-close range."

Weapon Stats Adjustment
"The M82 is currently a bit too strong as a lootable weapon due to its increased damage to Gloo Walls. We are tuning down the damage of the ballistic rounds in this patch so opponents hiding behind the gloo walls can have an opportunity to react against the M82B."

Weapon Stats Adjustment
"The M14 is currently in a weird spot because it is not as strong as a regular AR, and not as effective as the DMRs in long range. We"re giving it a small buff this patch to make it more viable."

Stats Adjustment
"We are adding the grenade cooking mechanism to the flashbang as well to make this utility grenade easier to use. Use this wisely to take away any opportunities for your opponent to react!"

Stats Adjustment
"The Smoke Grenade is currently really difficult to use because the smoke takes too long to bloom. We are increasing the speed of the smoke spreading and making the smoke grenade travel further so it can provide more viable strategically."

Available for All Machine Guns
"Machine Guns large magazine size currently does not give them an advantage during suppressing fire because the slow rate of fire and recoil makes hitting enemies extremely inconsistent. This patch, the players will be able to activate the Machine Gun Mode by crouching to increase the fire output to their enemies."

Brand New UI Rework
"We"re making big changes to the Loadout Menu this patch. The brand new UI will allow you to make sure you are using the right Loadout and Character Skills before you head into battle."

Brand New Interface
"Introducing the Heroic Emblem, a new feature that tracks down all your achievements in every rank season. Start collecting them and show them off to your friends!"