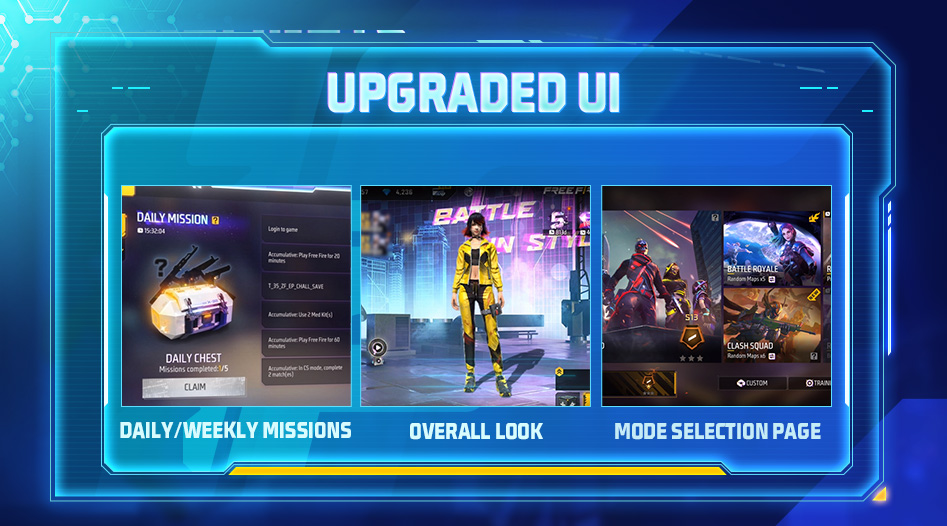 "Welcome to our 5th anniversary! Get ready to immerse into a brand new Free Fire through its updated UI, including the lobby, pop-up windows, and much more! Jump in-game and experience the “Battle in Style” spirit!"

Mode selection page:
- For each of Battle Royale and Clash Squad casual modes, compiled the maps into a single entrance to enable multiple selection for matchmaking.
- Upgraded the interface layout for more orderly display.

Crazy Slayer can now be triggered by knocking down enemies.

"We understand that many of you guys find it difficult to activate Miguel’s skill and are reluctant to use Crazy Slayer in your battles. This patch, Crazy Slayer can be triggered after knocking down an enemy so that you can pair it with other recovery skills and lengthen your time on the fighting pit."

"As you already know, armor is crucial during the looting and fighting stages. Previously, armor durability would often drop to zero after engaging with enemies once. we made adjustments to Andrew’s skills to enhance armor durability protection."

Lowered the power of armor penetration.

"The skill of Awakened Hayato enjoys not only damage reduction but also armor penetration, which makes the ability powerful for both attack and defense as well as under any situation. Therefore, in this patch, we toned down Hayato’s armor penetration abilities for better balance."

"Antonio’s skill was only useful at the initial stage of a match, so we increased the maximum HP that his skill adds."

"Other than a quick reload speed, the SMG damage boost has also been a unique add-on to Nikita’s skill. Since it was difficult to trigger the damage boost and the single-bullet damage of SMGs is rather low, we increased the damage boost of Firearms Expert."

"Raise your hand if you’ve ever missed an enemy after the first shot. Since a combination of skills that boost movement speed may make it almost impossible to hit enemies with such a skill combination and therefore negatively affect the gaming experience for other players, we lowered the speed increase of Nutty Movement for a better balance."

Modified the locations of certain spawn points in Kalahari.

Kalahari
The Maze and Council Hall: Slightly moved the spawn points horizontally so that both sides are equidistant from the high ground.

Skills Details on the Scoreboard

View details and statuses of skills on the scoreboard.

"Information about skills is an important part of the battles in Clash Squad, which is why we added this information to the scoreboard so that you could see the statuses of the active skills equipped by teammates and opponents. This way, you can adjust your battle tactics according to your teammates’ skills and think of ways to counter opponents’ potential skill activations."

Every match has a chance to trigger a random buff.

"Looking for some new excitement in Clash Squad? This patch, we are thrilled to bring to you a series of random buffs in Clash Squad mode (custom rooms): Constant HP Gain, Constant HP Loss, and Max. HP Booster. Hop in-game and try them out!"

Custom rooms in Clash Squad mode now supports the following buffs (there is a random chance to encounter any one of the buffs every match): 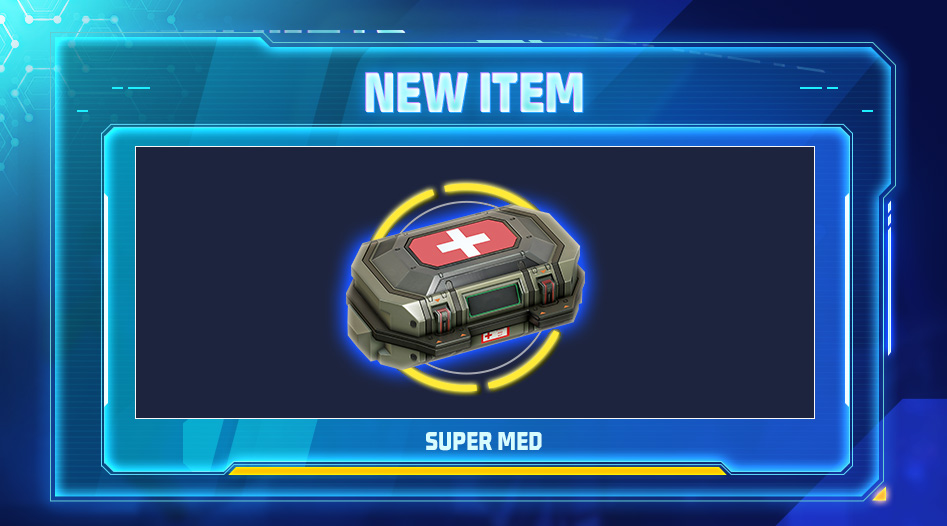 New item: Super Med, which takes 4 seconds to consume and restores 200 HP within 4 seconds. Available in the Airdrop.

Heightened the usefulness of War Chests towards the end of a match.

"Often bummed out when you see a War Chest from afar, sprints towards it out of sheer excitement, only to find that it had already been looted? To save you from such disappointment, we added a random refresh mechanism to War Chests. You can now spend FF Coins to refresh the items in them and the refresh chances are unlimited (as long as you have enough FF Coins!)."

War Chests will level up in time. Maximum Level 3.
The first loot of a Lv. 1 War Chest is free, and every subsequent refresh will cost 100 FF Coins and every loot will cost 300 FF Coins.
High level War Chests have better chances of opening up rare items.
Rare items include Super Meds, Horizaline, UAV, Upgrade Chip, all kinds of Airdrop weapons, etc.

Enhanced the randomness of the final Safe Zones.

"Say goodbye to taking a wild guess that the final Safe Zone would be at the center of the map, as we optimized the logic of determining the final Safe Zone. Embrace the excitement and challenge that this enhancement will bring!"

Optimized the zone-shrink logic in Battle Royale mode so that the final Safe Zone is generated in better randomness. While in battle, players must also actively look out for changes in the zones.

New item: Super Med, which takes 4 seconds to consume and restores 200 HP within 4 seconds.
New weapon: Bizon.
More Airdrop Vending Machine drop locations.
Killstreak announcements.
Free items in the Vending Machine will be labeled as “Free”.
Reduced the time it takes for zone damage to increase after continuously being outside the Safe Zone. 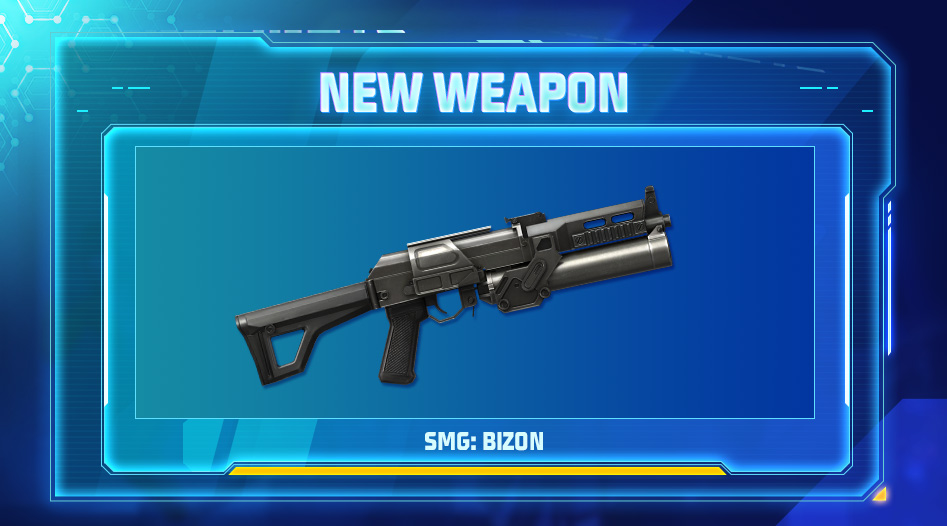 "Bizon is an SMG that fares excellently in close combat. It has an extremely high rate of fire that can cause high damage, but with destructive damage also comes low accuracy." 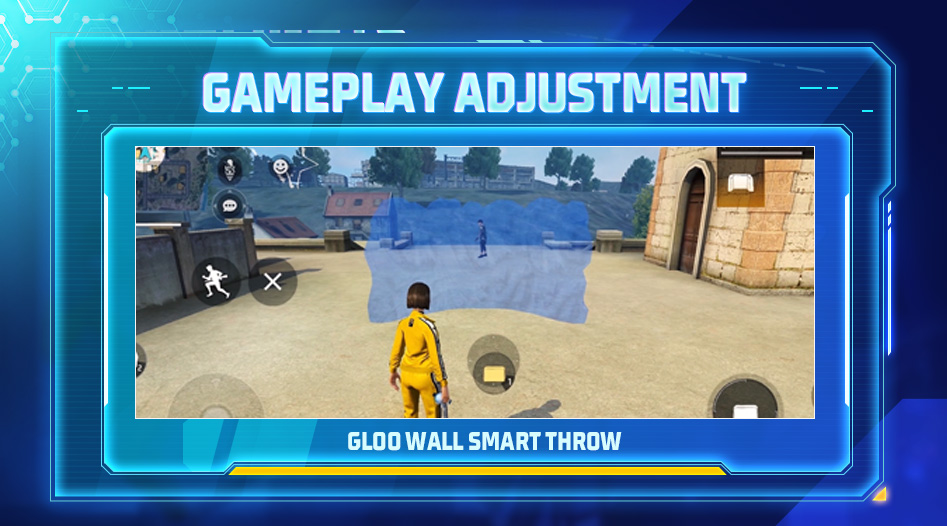 Be the Gloo Wall guru!

"The Gloo Wall has been one of the core elements of Free Fire’s gameplay, whether in pro battles or casual games. Speeding the process of placing Gloo Walls would help our fellow newbies get acquainted with this item faster and easier!"

"As the features in Free Fire grow in number, there is an increasing need for quick access to different items and functions, such as quick messages, grenades, and Med Kits. This patch, you can enjoy a more convenient command selection through our in-game command wheels."

Add characters to your favorites so that they will appear on the top of the list.

"We all hate looking for something in a long list. Now you can easily and quickly find your favorite characters by tapping “favorite” on their respective pages, so that they will be displayed on the top of the list next time you want to equip them."

When added to favorite, the selected characters will be shown on top of the:

"We learned that players tend to use our Replay feature to review their performance and work on areas of improvement. Additionally, some players want to cut out certain moments in their battles and share with friends. Therefore, we upgraded our Replay function to bring you a faster, more convenient, and more efficient user experience."

"Sometimes, little emotional touches add a lot to the overall gaming experience, whether they may be cheering for your comrades or saying “Thank you” when a teammate helps you up. Previously, the biggest difference among Free Fire characters was their skills, and the rest were pretty much the same. Now, we added character interactions that will activate under certain situations, so that you can feel the uniqueness of each of our fighters!"

- When all players in a team force quit except one remaining player, the last player will not face Honor Score deductions from quitting.
- Players can now mute / unmute teammates in the lobby or room.
- When a friend’s booking is received and accepted while in-match, the receiver can now send a join request and a whisper to the friend (if the friend is in a group).
- Players can now copy and paste teamcodes.
- Optimized post-match friend recommendations.
- Differentiated reward icons now added next to corresponding resources in the Download Center.
- If a player is detected to be using a cheat during a match, they will be automatically removed from the match and the remaining players will receive a system notification.
- Enhanced visual indications of obtaining Gold. The Gold amount will have a special effect to notify about the amount increase.
- Optimized the user experience of Upgrade Chips.
- Optimized the sound effects of the Charge Buster.
- Optimized the visual effects on the skill icons when passive skills are activated.
- Optimized the visual effects on the skill icons when silenced by A124.
- Teammates whose locations are out of the scope of the minimap will be pinned to indicate the direction of their locations.
- The list of loot on the ground will be displayed according to the priority in the auto pickup settings.
- In Clash Squad mode, teammates who Ace can be given thumbs up multiple times in a row, with a maximum of 10 times.
- Optimized the visual effects of hitting an enemy using a Flashbang.
- Optimized the minimap display of using the UAV in Clash Squad.
- Force quit from the settings menu is no longer supported in CS-Ranked.
- Extended the reconnection time frame for CS-Ranked. Players will be reconnected in their next login if they are accidentally disconnected due to internet issues or application crash.
- Added the FF Knife as a weapon in Lone Wolf mode.

"If you are sometimes tired of hardcore competitive matches, try out our two newly crafted PVE gameplay in Craftland. Bring your buddies for some collaborative fun!"

"Under the newly added recommendations tab, you can now browse the map designs that we recommend as well as reasons that we think they’re worth checking out, including the maps’ enjoyable aspects and unique areas."

Voice your opinions about a map design and read comments from other players.

"Not sure whether a map is your cup of tea? Let the comment section help you out! This patch, you can learn about what others think of a particular map from comment tags and choose your own comment tags for maps that you’ve played."

Comment tags can be added at the end of a match and on the map details page.
Comment tags are categorized by “Pros” and “Cons”.

- Cleaned up and restructured the HUD.
- Objects and stacks of objects can now be copied.
- Adjusted the object selection panel and added more categories.
- Movable items, such as vehicles, can now be configured to be placed back to their original places after every round.
- Shrinkable objects now support color change.
- New objects added.