“Tatsuya was a shy and sympathetic boy in his childhood. After his father's death and the discovery that he was a traitor to the city, Tatsuya and his surviving family suffered endless prejudice and discrimination. He became a truant, who hung out with gangs, and fought against other teenagers who dared to speak ill of his family. Having lived in the hustling and bustling city of Griza, Tatsuya is used to all kinds of brawling and has been using his agile speed for attack and defense. Whether it is to ambush his enemies or to swiftly find cover to retreat, Tatsuya is always on top of his game.”

Increased the speed of HP recovery.

“Dimitri was designed to enhance the survival capabilities of teammates while engaging in intense combat. Now, the character provides more health recovery to the team. You can probably argue that you carried the entire team even when you had been knocked down ;)”

“As you may already know, moving around while firing has low accuracy, and the accuracy boost of Bullet Beats isn't powerful enough to help you win the battle. So, in this patch, we improved the accuracy and movement speed of Bullet Beats, so that D-Bee could still slay with swag.”

Increased the durability of Gloo Walls.

“Skyler, Iris, and the new throwable, Gloo Melter - there are now many ways to counter-attack a Gloo Wall. But of course, Nairi will not allow his Ice Iron to be easily destroyed!”

“Crazier risk, crazier return. As you all know, we reworked Miguel's skill in the previous patch. However, we noticed that the competitive advantage to the skill is still not enough for consecutive combat. Therefore, in this patch, we increased the skill user’s EP boost to even things out.”

“Raise your hand if you often struggle to aim at moving enemies even when scoped in. This patch, Laura will be a sharper shooter to help you aim and fire at your foes more accurately.”

“I equipped Damage Delivered, but I still don't see the attacking enemy’s location!' - if this was you, worry no more! We adjusted Shirou’s man-marking range to 100m to help you locate your enemies easier. Now just wait for Shirou to deliver your Booyah!” 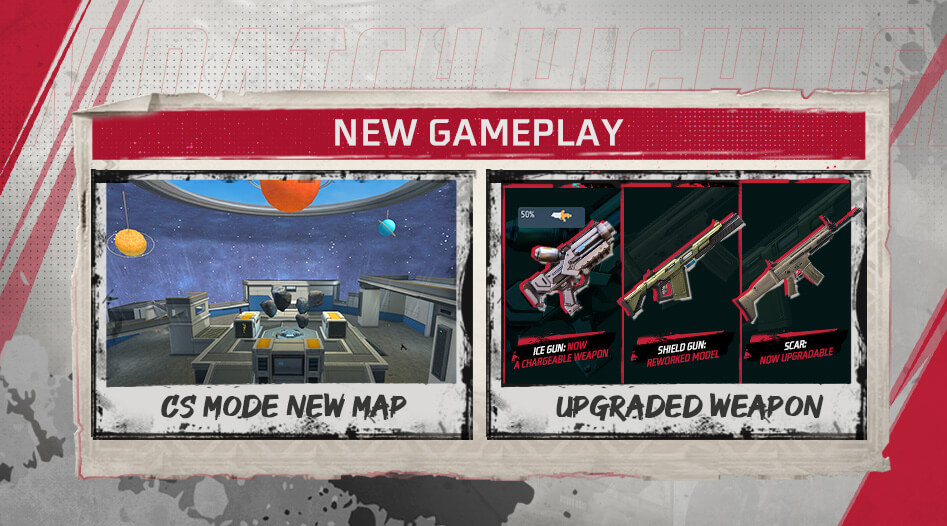 “After releasing NeXTerra in Battle Royale, players are looking forward to more gaming experiences in the new map. With the new zones and unique map interactions in NeXTerra, you can look forward to having a fierce Clash Squad battle in NeXT season!”

“To bring new excitement to Clash Squad, we are thrilled to introduce upgradable weapons to this 4v4 mode. You now have more weapon options for the last few rounds, in which you could either purchase a secondary weapon or invest all your CS Coins in upgrading to an ultimate weapon.”

View the details and statuses of your teammates' skills.

“Information about skills is at the core of the battles in Clash Squad. Therefore, we added skills displays in various places so that you could see the skills equipped by teammates. Such information is now available while in the lobby with your team, on CS Battle Cards, and from the CS scoreboard. This means that you and your team could communicate strategies right in the lobby. Even if you are teaming up with strangers, you can still adjust your battle tactics according to your teammates' skills combination to find the best way to Booyah!”

Teammates' skill combinations are now available in the Team Lobby and on Battle Cards and scoreboards. 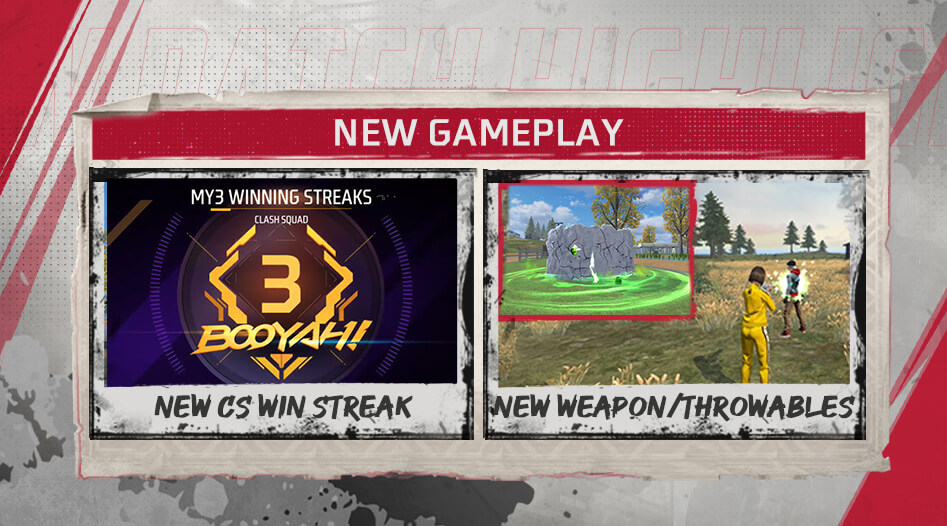 Show the world that you are on fire!

“On a winning streak and eager for a way to show it off? Now, you can flaunt your consistent victory to all your teammates. There is also a new winning streak animation after your Booyah. Be sure to check it out!”

CS winning streak will now be displayed in several places:

Adjusted the design and number of revival points.

“Ever came so close to successfully reviving your teammates at a revival point but was discovered by an enemy and did not have a Gloo Wall to take cover? In this patch, there will be a pillar inside the revival point, not only used for indicating your revival progress but also providing cover for when enemies attack. Enjoy being celebrated as a hero who resurrected three comrades while low on HP!”

Revival points will now have a pillar, which glows to indicate revival progress.

The locations of revival points will now be fixed, instead of random.

Increased the number of revival points from 8 to 12 in Bermuda, Alpine, Kalahari, and Purgatory.

Revival points are now immediately shown on the minimap at the start of a match.

“Good news to all our Free Fire Players who loved the map interactions in NeXTerra! This patch, we activated the carousel in the middle of Farmtopia and the moving platform on the second floor. You can now have a more varied game experience in Farmtopia. Remember to watch your head!” 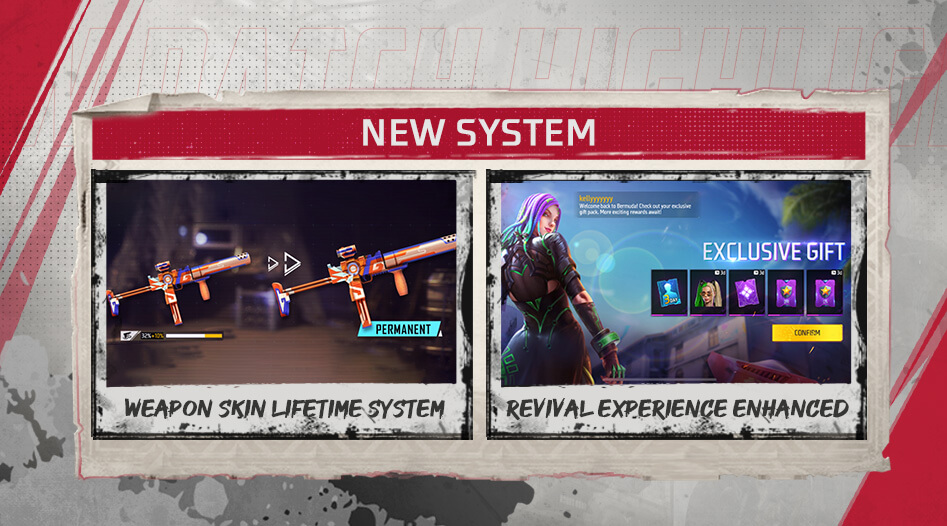 - The new rank protection card will be time-limited and automatically used during ranked matches.

- The new rank protection card will have a strict restriction on applicable rank, season, and availability.

- The former rank protection card will be converted into equal amounts of the new versions.

- You can obtain a rank protection card by reaching the designated rank.

- Ever matched with a Bronze player during a Heroic match? It may be because your teammate had teamed up with a Bronze player. To avoid more of these situations, we have added a rank restriction for teams that are not full, so that players who are not within the acceptable range will not be able to play the ranked match with you.

- This restriction is not applicable to squad teams that are full. Of course, you can always play casual mode with your friends!

- In BR-Ranked and CS-Ranked, helping up, healing teammates, and reviving will all count towards the final score.

- The score details will be displayed on the match results page.

Kudos to those who love helping out newbies and veterans!

“Starting from this patch, newbies and returning players will receive a Team-Up Bonus whose perks can be shared with their fellow teammates. During the process, you can also earn Buddy Coins, which can be used to exchange for rare items at the Buddy Mart. Summon your newbie and veteran buddies for a match now!”

Team up with newbies and returning players to enjoy a faster LINK progress accumulation and more character fragments.

“If you want to be the Best Bud that everyone is searching for, here's your chance! On top of the Treatment Sniper and Treatment Pistol, we designed the Treatment Laser Gun that heals teammates quickly and easily at mid-range.”

“Gloo Walls can be such blockers to your road to victory. This patch, we are excited to introduce the Gloo Melter! Let it help you break down your enemies' walls.”

After the explosion, the grenade will create a circular range at the target location, inflicting 150 damage to the Gloo Walls in it for 12 seconds. While the throwable is active, Gloo Walls inside the range will also take double damage when attacked by weapons.

“If you often find that you run out of ammo very quickly, it's probably because you did not attach a magazine to your weapon. Attachments are key to enhancing weapons, so don’t give all the credits to Upgrade Chips. This patch, there will be specialized attachments for different weapons.”

Shotgun Stock: on top of possessing the accuracy boost from a typical Lv. 3 Stock, this item reduces reload speed by a 0.2s and weapon-switching speed by 0.1s.

Marksman Rifle Foregrip: on top of possessing the accuracy boost from a typical Lv. 3 Foregrip, this item increases rate of fire by 7% and scope speed by 10%.

Sniper Stock: on top of possessing the accuracy boost from a typical Lv. 3 Stock, this item increases rate of fire by 7% and movement speed while scope in by 10%.

“On top of regular weapon enhancements, we also adjusted the headshot damage. Were you ever suddenly eliminated but couldn't locate the attacking enemy? This patch, you have a chance to respond to an ambush, such as placing a Gloo Wall behind you and letting your teammates have your back while you heal.”

- SCAR → SCAR-I: increase in damage and rate of fire.

Try out the new HUD!

“Based on players' feedback, we added a new set of HUD, which places buttons for throwables, Gloo Walls, quick messages, and pins to the right side of the screen. The buttons of commonly used functions are also bigger, so that you can conquer the fighting pit easier!”

The former Social Zone is now an independent Social Island.

“The new Training Grounds will now be solely used for training purposes. The previous Social Zone is now an independent territory, called the Social Island, which can be found on the mode selection page. We built a football pitch on the Social Island, where you will be able to flaunt your sportive side once the pitch opens up!”

Players can enter the Social Island from the bottom of the mode selection page.

- When picked up, armor attachments will be automatically substituted with their higher-tier versions.

- When a player is knocked down, they can choose whether to stand or crouch after being helped up.

- In Battle Royale mode, players can choose to give up their lives when knocked down.

- Quick messages can now be used while spectating.

- After being knocked down, you can now view the reason for being eliminated and enemies’ damage statistics.

- Added audio-balancing function, which can be used to tweak the proportion of voice messages and sound effects without affecting overall volume.

- Mission progress on the match results page will now include veteran missions.

- Updated the daily check in page.

- Adjusted the position of the replay function button for better convenience.

- Adjusted the auto-download content at the Download Center. The very old resources will no longer be automatically downloaded.

- Receive immediate report feedback once you successfully report a player.

You guys asked, and we delivered.

“Introducing: Free Plays! A new way to play Craftland maps for free, Free Plays are given out weekly to all players. Come and explore the limitless Craftland gaming experience with your friends!”

Free Plays refresh weekly on Mondays at 4AM.

Receive bonus Free Plays when you publish your own maps!

Search for rooms according to the desired map.

“Now, you can search for available rooms based on a certain map. Just pick your favorite map, and join a room to get it going! But what about room cards, you ask? Well, they’re FREE NOW!”

“Use this template to design your own droid attributes and create entirely new gameplays. Of course, a customized terrain for the war will make it perfect.”

- Properties of Humans and Droids

- Round duration and other basic settings

“It’s FINALLY here! A customizable store has always been high on the wishlist, and we are excited to make it come true. As a creator, you may now fine-tune currency outputs, store items, and pricing. Feel this brand new power at your fingertips!”

Supports the sale of most weapons and equipment.

Supports multiple stores in one map.

- Enhanced the default terrains for some modes.

- Updated the cover image for some modes.