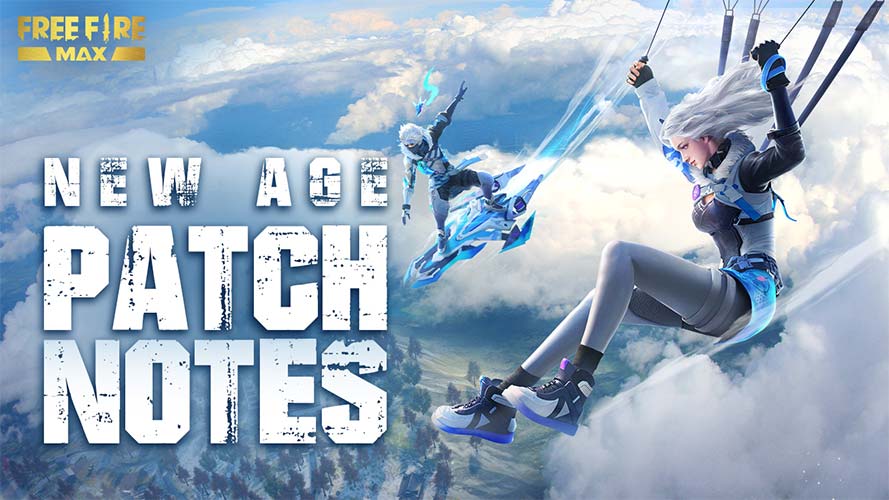 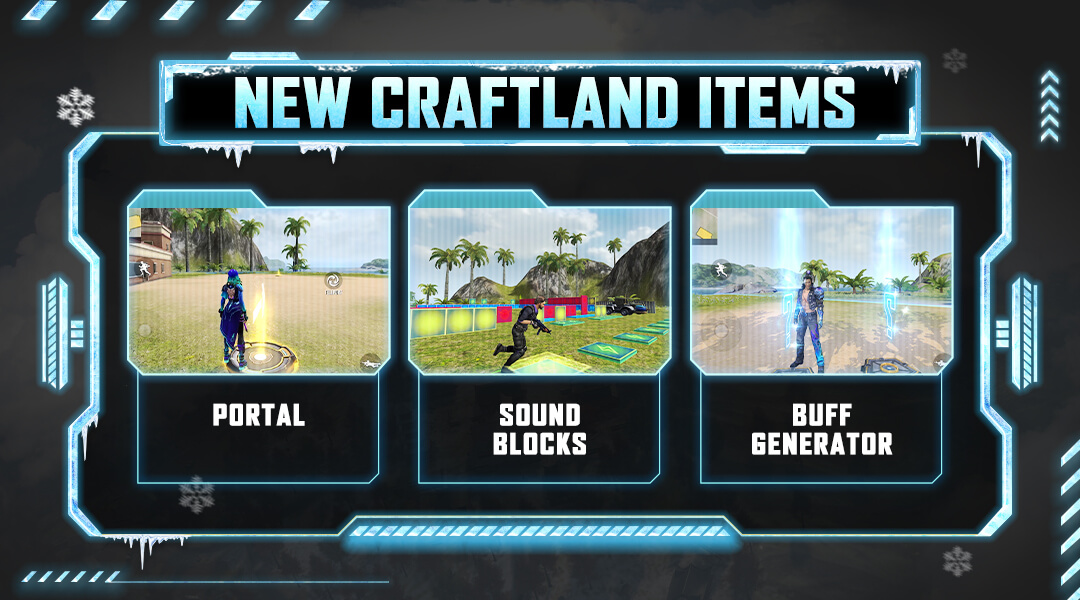 Sound Blocks, Portal, and new mode available.
"We’re introducing more editing features in Craftland this patch so you can create the map of your dreams! You can now use Sound Blocks to make music and use Portals to teleport across the map. Let us know what you want next!"

New item series - Sound Blocks - step on them to create different kinds of music!
New item - Portal - teleport from one location to another.
Mode Editor - Customizable team size, spawn point, and other options for Clash Squad or Team Deathmatch. 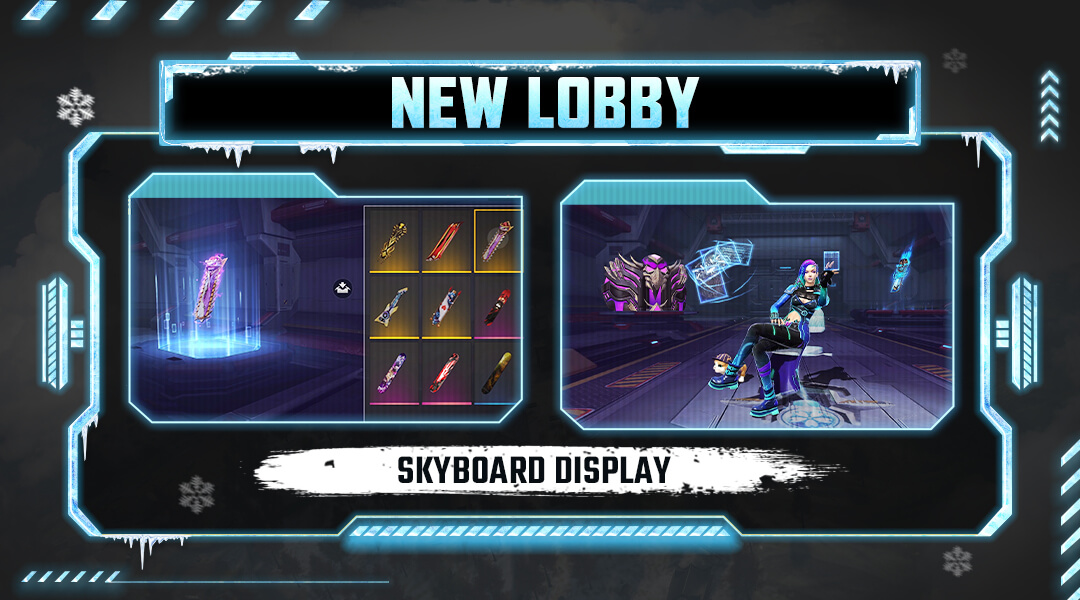 Added Skyboard display.
"We heard that you guys wanted more customizable areas in the lobby. You guys asked and we delivered!"

- Weapon animation adjustment for the Pan.
- Optimized the facial expressions for Moco, Kelly, Hayato, and Andrew.
- Optimized the reload animation for AC80, SVD, and Vector.
- Adjusted the color of the play zone in Battle Royale mode.
- New graphics settings available in the settings menu.

The force field can no longer be shot through.
"Time Turner is no doubt one of the stronger skills in the current meta because players are too safe while attacking from inside the shield. The instant-deployable force field leaves no room for opponents to react. We’re making Time Turner’s shield a two-way protection so players can no longer shoot the enemies outside, therefore leaving room for counterplay. With this change, we’re giving the force field a longer duration and more HP so when you activate Time Turner, you know you will be safe inside the shield."

EP recovery increased, MAX EP increased.
"The Psychology Mode in Master of All is currently a bit too slow so it is difficult to switch to Jiu-jitsu with enough EP. We’re giving this skill a bit more power so it keeps the user’s HP and EP at a healthy level throughout the rounds."

Revival time decreased.
"Vital Vibes’ rescue speed is currently not strong enough to make it relevant when rescuing teammates in danger. We’re giving this skill a bit more power so you can help your teammates heal faster."

Choose weapons for your enemies.
"Lone Wolf is back for a limited time only! This patch, you and your opponent will take turns every two rounds to choose the weapons both of you will use. In order to win, you’ll have to beat your opponent using not only your favorite weapons but also the weapons of their choice. Do you have what it takes to triumph? See you in the Iron Cage!"

Players will take turns to choose the weapon for themselves and their enemies every two rounds.
Weapons that are picked will have a cooldown before it can be picked again.

Map size increased.
"The Iron Cage was a bit too small for 2v2 battles. We’re increasing the size of some of the cages in this patch so you can have more room to work with." 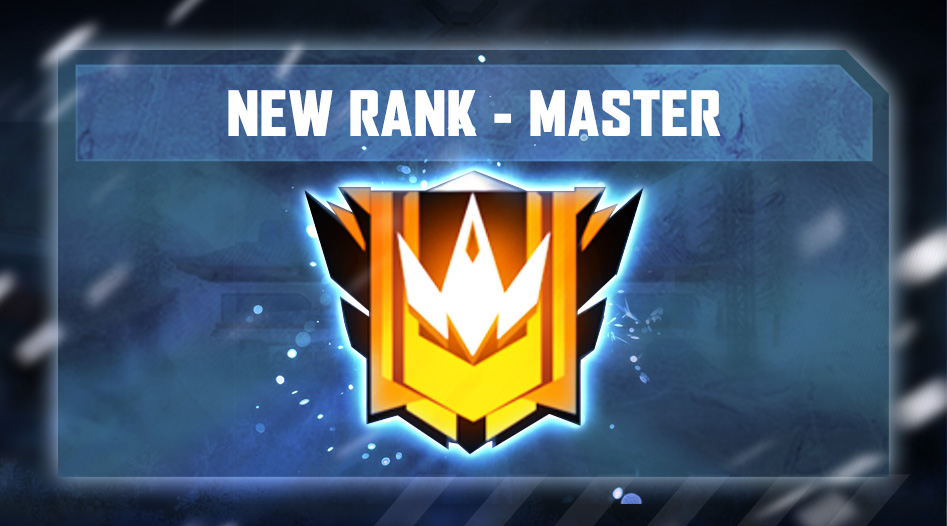 New rank tier available.
"Introducing the Master rank, a new rank tier above Heroic. It has come to our attention that the skill gap among Heroic players is getting larger so we decided to add a new rank to make the ladder a bit more competitive."

Players can now get to the Master rank after reaching Heroic in Ranked Modes. 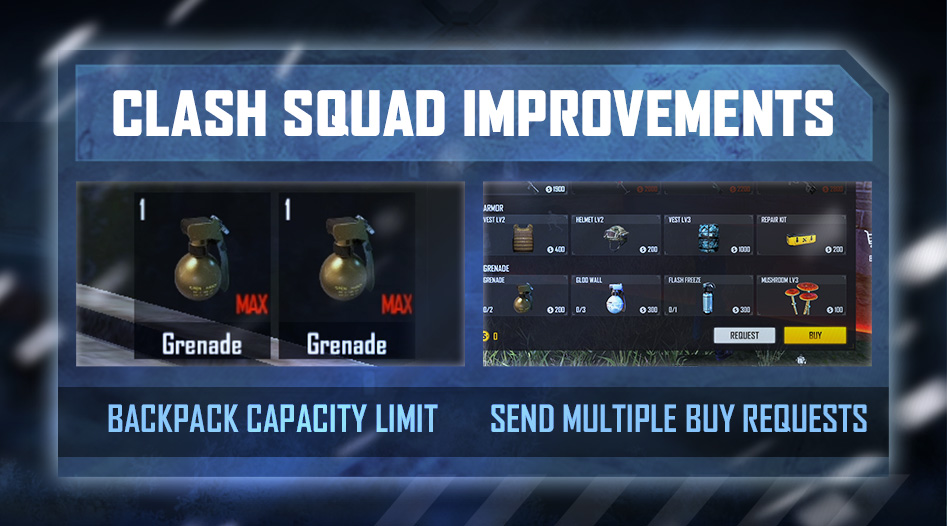 Can now request for multiple items.
"We’re allowing players to request more than one item if their previous request was fulfilled. Because why not?"

Additional item requests can now be sent if the previous one was completed.
Radio commands will now be triggered when item requests are sent.

Map adjustments.
"It is the worst feeling when you are spawned into the lower area of the Mill in Clash Squad because it is literally an uphill battle. We have adjusted the areas at Academy and Mill to make these two areas more balanced."

Map adjustments for Academy and Mill.

Added restrictions on the maximum number of items that can be carried.
"Currently, players can carry more than 3 Gloo Walls or utility Grenades into the next round of Clash Squad and this makes it difficult to come back under such a utility disadvantage. We’re limiting the amount of items that can be carried in Clash Squad, so enemies can never carry more than they can buy."

Adjusted the currency and items sold in the Vending Machine.
"The FF Coins used to be a bit too restrictive because of the amount of coin stacks dropped on the map. We’re adding more coins to be dropped to adjust the economic system in Battle Royale."

Adjusted the minimal amount of FF Coins to 100.
The appearance of the coins will now change based on the amount of coins in the stack. 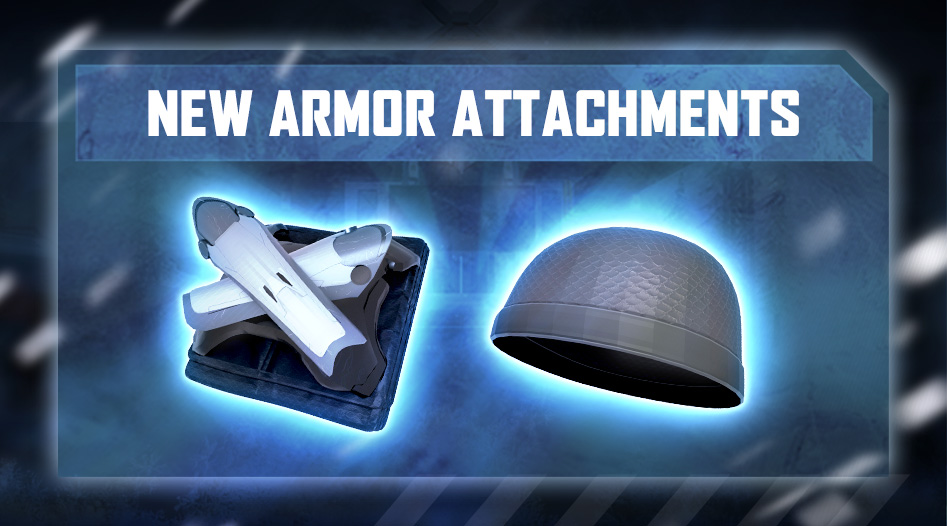 New weapon available.
"MAC10 will be the new SMG we’re introducing into this patch. With its pre-attached silencer, the MAC10 can easily pierce through enemies who wear heavy armor."

Effective range decreased.
"There are a few weapons that are currently too effective in the long range, making it unnecessary to have other weapons in the inventory. We’re reducing the effective range for a handful of weapons to spice up the weapon options in all game modes."

Recoil decreased.
"The SCAR has been one of the weaker ARs due to its lower accuracy. We’re giving the SCAR a small buff in this patch so it can be a bit more accurate even after the first few shots."

Recoil decreased when prone or crouched.
"The Machine Gun Mode sacrifices a lot of mobility but does not provide a significant advantage at this moment. We will be giving it a bit more accuracy so you can actually hold down the fire button while stationary."

Reload speed decreased.
"We’re increasing the reloading time for the UMP and the XM8 so players have a bigger window to close the distance with enemies who hold these weapons."

Rate of fire increased.
"The MP5-X is one of the rarest drops on the map but the damage output it provides is still significantly less than other top SMGs. We’re giving its rate of fire a small adjustment so it can be a handy companion for the final circle."

Rate of fire increased.
"The Kar98k is currently one of the weaker snipers due to the slow rate of fire, making it difficult to connect shots consistently. We are giving the Kar98k a slight adjustment in this patch so it can be a more viable option in the mid to long range."

Armor Penetration Increased.
"Despite the low drop rate, the Groza is currently not that much stronger than others ARs. We’re giving the Groza a bit more power this patch to make it a bit more reliable against fully armored enemies."

Adjusted the time it takes to swap to a different weapon.
"We’re adding a weapon swap time for all the weapons so you’ll have to decide the best moves when you’re running out of ammo in your clip. Remember, pulling the pistol out is always the fastest!"

The time it takes to swap weapons will now vary according to the type of weapon being used.

Flashed targets are now more visible.
"It was a pain to find whether an enemy is actually flashed by a flashbang. We’re adding stronger indicators on enemies to make it easier for you, your teammates, and everyone else to spot flashed players."

Optimized the display of flashed targets.

Assists will now display on the HUD.
"It is currently a bit difficult to know if the enemy you have wounded is taken down by your teammates or not. We’re adding assist notifications to this patch for you to know when a teammate has taken down (or stolen your kill on) an enemy you had attacked."

Can now mark more targets, including enemy locations.
"We are optimizing the Pin Marker so you can pin almost everything that is visible on the map. You can also double tap to pin enemies’ locations!"

The pin marker can now mark all the objects, vehicles, and items in the game.
Players can double tap the pin button to alert teammates about enemies nearby.

Added settings to toggle on during parachuting.
"Adding a new option in Free Look so you can have more freedom of looking around while parachuting but still have a clean HUD when you’re on the ground."

Added a setting to turn on Free Look only during parachuting and driving.

2-in-1 sprinting option available.
"Having a hard time choosing which one you like better? Well, now you can have both!"

Drag and tap can now be combined in sprinting settings.

Trademarks belong to their respective owners.