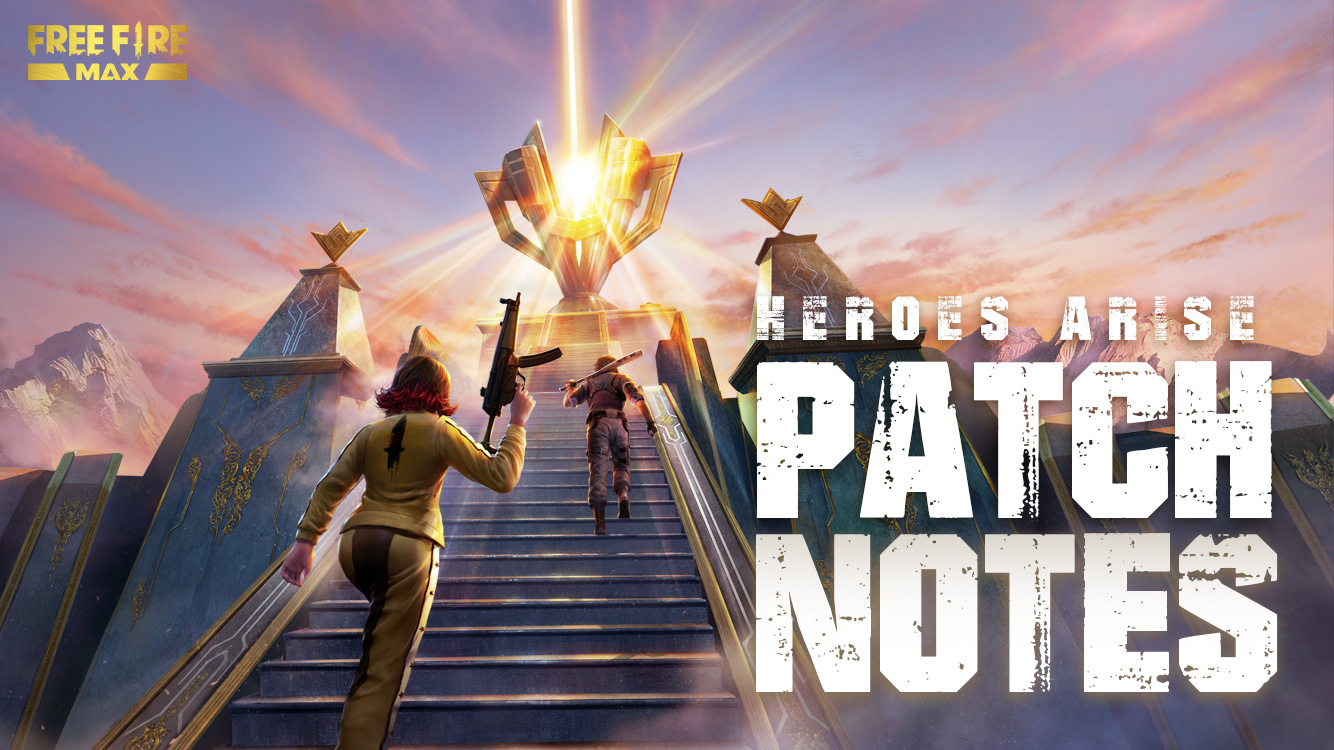 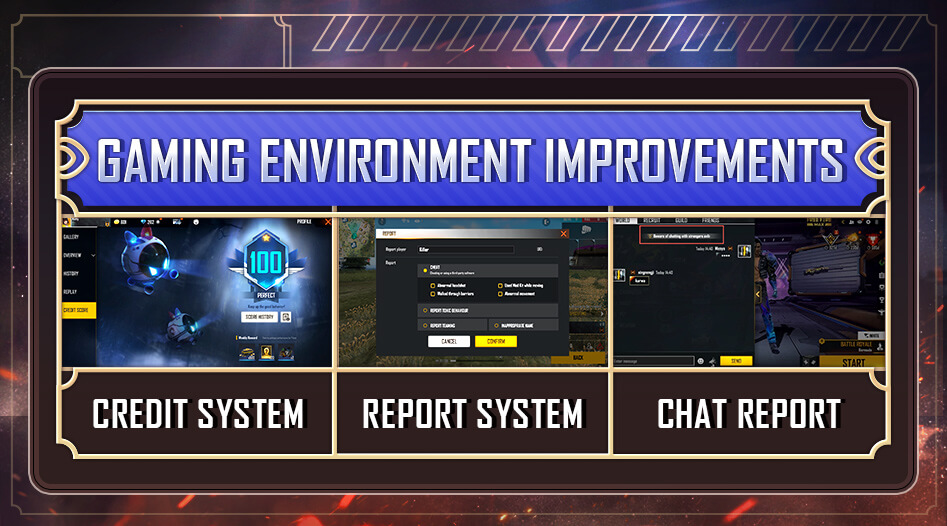 Introducing a scoring system for players' convenience and visibility with their account statuses.

"We have long believed that Survivors who give a helping hand and keep their attitudes positive should be recognized and honored, and rightfully so, those who flame and quit should be punished. We can proudly announce that our vision is now a reality.

- Accounts that have been reported and verified to intentionally throw the game, AFK, force quit, or are verbally abusive will have 1-4 points deducted, while frequent abusers will face extra score deduction.

Reporting is made more efficient, and report responses are more trackable

"We strive to keep a healthy gaming environment in Free Fire, and we hope every player can participate in that. We believe that toxicity should not be tolerated anywhere within the game, hence we deliver the following expansions."

- You can now report another player in your match history page.

- You can now report another player in CS mode scoreboards.

"We realized that when a toxic player decides to flame their teammates in voice chat, there's not much their teammates can do beyond muting. Voice chat reporting feature is now available. Those who violate community guidelines will face a VC mute punishment, and a credit score reduction."

- To protect your privacy, the detection will only take place if a report is sent.

- Added a new feature to the current mute button where you can report selected player(s) on the spot.

- Once verbal harassment is verified, the player faces a mute punishment, and a credit score reduction. 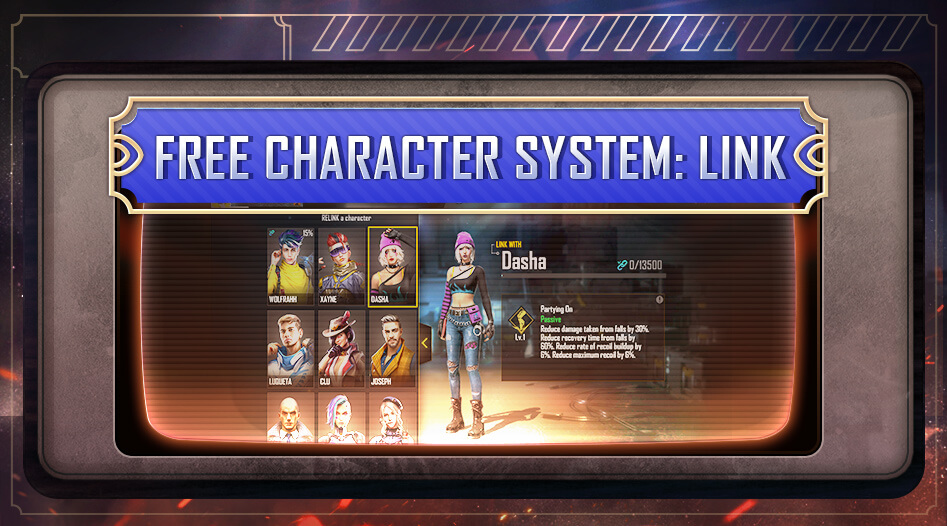 Get free Characters with LINK!

Players can obtain free Characters by playing games in any mode

"As Characters and their skills have become a fundamental part of our gameplay, we've come to realize the importance of making Characters more accessible. Now, all existing Characters are available through LINK for free! Say goodbye to paying for Characters!"

- Players may only link with one Character at a time.

- There's a limit to the LINK points players get per day.

- Players may give their LINK progress an extra boost with coins (limited per day).

- All Characters prior to this patch update will be included in the LINK system.

- Reduced Character Fragments needed for leveling up: (See in 1st form below)

- Reduced the costs for unlocking skill slots: (See in 2nd form below)

"Kenta is your team's most reliable backup. When activating Swordsman's Wrath, he puts the gun down and generates a shield before him. Teammates behind his shield will benefit from its partial damage negation. Kenta is a great front-line Character, and will be sure to help your team break through heavy fire. Remember to follow his footsteps!"

"We reworked A124's skill, giving great power to her ability to interrupt. Any skills and countdowns will be stopped by her powerful skill zone. See those enemies hiding behind gloo walls and healing? Let’s give them a pleasant surprise! ;)"

Reload speed is no longer affected by gun types. SMG causes more damage when in its last shots.

"Nikita's performance was really held back by the limitation of gun types, so we made sure to freshen that up. We also increased her damage if using an SMG, making her last 6 shots extra powerful. An outstanding agent makes sure no bullet goes to waste."

"Steffie's skill no longer offered enough support to her teammates. In this patch, we reworked her skill so that in her skill range, damage from explosives is nullified, and armor durabilities are restored. You can finally paint n’ protect with her! "

"Caroline's Movement Speed bonuses weren't prevalent enough when affected by equipment. We buffed her in that regard, making her easier to gap close and initiate close-ranged battles."

"We limited Rafael's skill to effect enemies shot by Snipers and Marksman Rifles only, but increased its bleeding speed. A true killer always goes under the radar."

"Thiva's skill has been underwhelming for support players. We packed a bit more punch to his rescues, hoping to bring him back into the meta."

"Who's to say no to a grand effect for your marvelous ACE?"

- Enhanced the visual effects when executing a quadra.

"Can’t find any enemies in sight? Don't know what to do before the next zone shrink? Accept special in-game missions that put your stealth and skills to test. Complete these goals within the time limit and receive exciting rewards!" 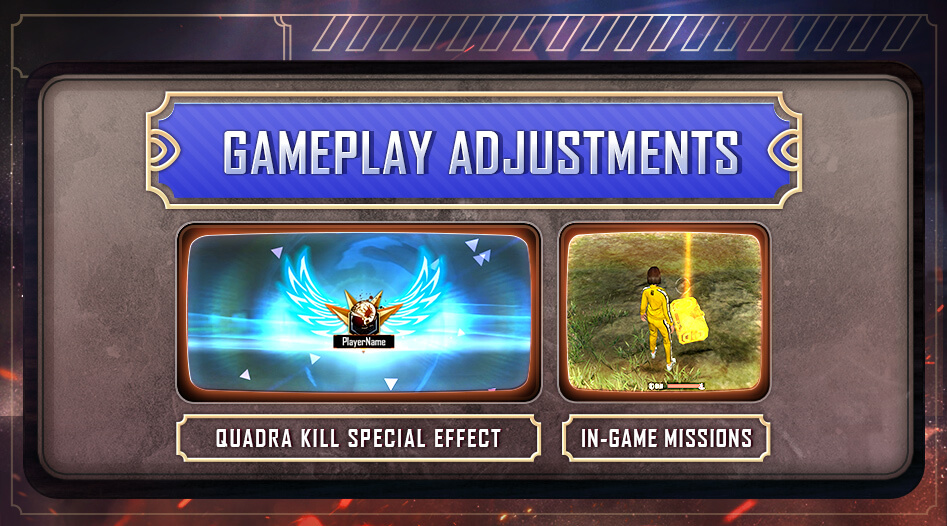 "All Ultimate Weapons are upgradeable now(3 stages) using the Upgrade Chip, except for airdrop ones."

- Weapons upgradable via the Upgrade Chip: 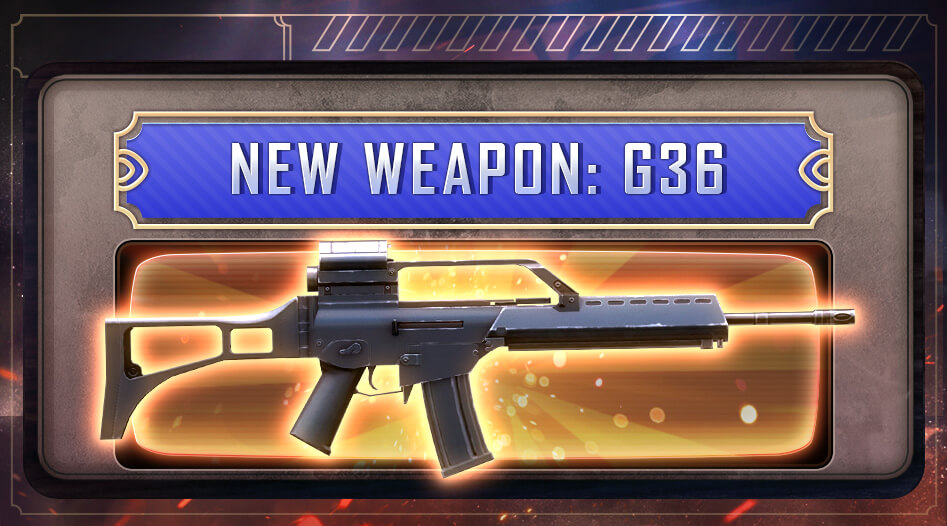 "The new weapon G36, paired with the unique firing mode switch feature, offers an all-encompassing experience, sufficiently covering the needs for short-ranged and mid-ranged battles both."

"In this patch, we pushed for a clearer range differentiation among weapons, hoping to really emphasize their specialities. Do remember to take the changes into consideration when switching weapons. Let us all be weapon masters :D!"

"Can't tell whether you landed a shot or not in the battle chaos? Try out our new vibration feature! Now you’ll be truly immersed in the intense battle!"

- Players may toggle and customize vibrations in the settings page.

"Ever wished for a faster-paced battle and hoped the zone would shrink quicker? Ever called for a rescue but teammates were preoccupied? New features are now available in custom room. Hit up a couple of friends and go nuts!"

- Auto Revival feature now available in BR mode. When turned on, players with enough FF Coins will be automatically revived.

- Customize the damage and speed of the play zone in BR mode.

"Damage and kills are not entirely indicative of a player's contribution to the team. Starting from this patch, we are going to gradually introduce a collection of stats in your results page, including but not limited to: assists, knock-downs, heal, revives. We encourage players to switch roles in their teams, for every role is equally crucial to victory."

- Revive/Rescues/Assists/Knockdowns are only available in multiplayer mode

- Revive stats are only available in BR mode

"We revamped the UI for your Memory Fragments and LINK status page, making it easier for you to track their progress. If you've collected enough Memory Fragments and are ready for a level-up, simply click on the button in the results page. We also increased the overall drop rates of Memory Fragments, giving your Character lvl-ups a bit of a boost."

Reworks in regards to web page layout and user experience 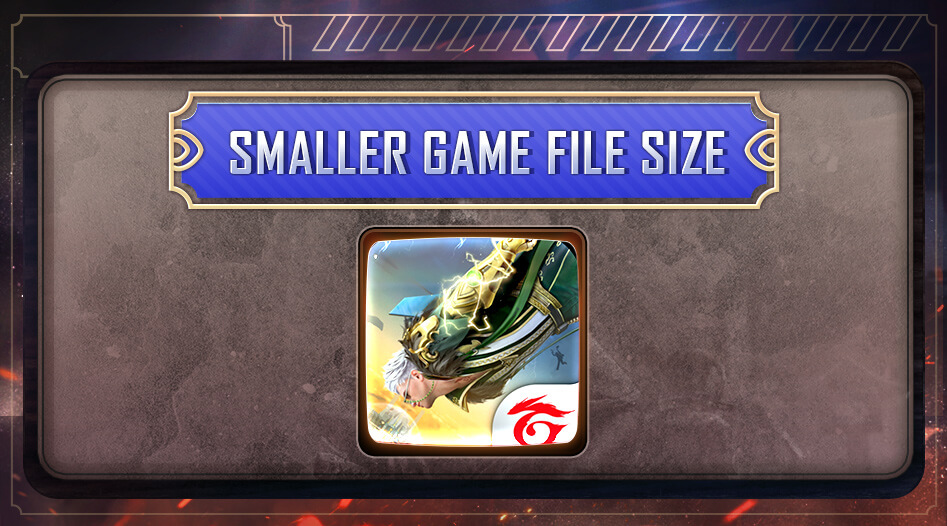 "As our game grows denser and richer, oversized packages have become an inconvenience for some players. In this patch, we uploaded various resources to our Download Center, giving players the freedom to download per choice. Meanwhile, we re-organized our web page UI, making navigation far easier than before."

- Airdrop vending machine can be accessed from all angles

- Optimized Healing Weapon interactions. Players may now easily recognize low-health teammates, who will be blinking with a red light on your team list

- Events page can now be opened in preset teams page

- CS Cup invitations now show up in the lobby

- educed the cost of pet level-ups

The Cooldown of Active skills can now be customized in Craftland.

"Craft your ultimate character with limitless skills. Have a blast (literally) in Craftland!"

- When creating a map, toggle to turn on and off passive and active skills. Active skill cooldowns can be adjusted to zero seconds minimum.

"Who’s to say the laws of physics still bound us in Craftland?"

- The object clipping feature allows for multiple objects to occupy the same space.

Multiple objects can be grouped and edited together

"It is always a challenge to create something new. But with the right tools, we hope to deliver on our part effortless execution."

- In editor mode, select and group objects together, and rotate/move your grouped objects simultaneously.

"Who can resist a little bounce?"

- Dice can now be placed in Craftland. They bounce off freely when touched by other players or dice.

"You guys asked, and we delivered FAST"

- New background for the 360-degree lobby.

- Optimized the UI for item display in the 360-degree lobby

- Optimized the reload animation for the M500.

Trademarks belong to their respective owners.